Now news is in that we embark on 13th, having been struck off duty on 17th December. An ”Iti” submarine reported off the Indian coast along Persia way, so I hope I don’t lose all my baggage.

Letter from Bill in Cyprus – none from Ma since October. On Tuesday I dined with Nigel Gribbon and then went to the boat club. He then left and I joined a party of the boys including the Simpsons – Mary Simpson – and one Violet, the latter being Alan Haig’s fiancée. I am supposed to look like Simon, and his wife Joan spends the whole time pointing this out to people. H.R. Irwin of Mahrattis and one Humphries of 17th have arrived to take over from us, also one Fairweather of 4 Gurkha Rifles. Humphries is banging glasses at this party to see how hard it can be done without them breaking, when quite rightly a neighbour objects, comes over, and they square up and above one another like fighting cocks. Pete then turns on Humphries and gives him no end of a dressing down.

They go out for a fight but Haig smoothes it over. Bed at 4am. 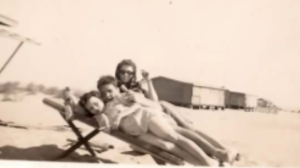 Fun on the beach at Sandspit

Next day off to Sandspit (JDW: famous beach south west of Karachi) – Simpsons, Mary, Violet, Pete, Haig and I. I ignore Mary at first, and after some whispering Joan asks me if I have met her, I say no, and she introduces us. Mary then proceeds to vamp me – successfully I admit but most amusing all the same. All day at Sandspit. Bathed but damn cold. Roll on the 13th. I am not taking much kit as I don’t expect to last out long in Habbaniya.

This entry was posted in 1941/01. Bookmark the permalink.